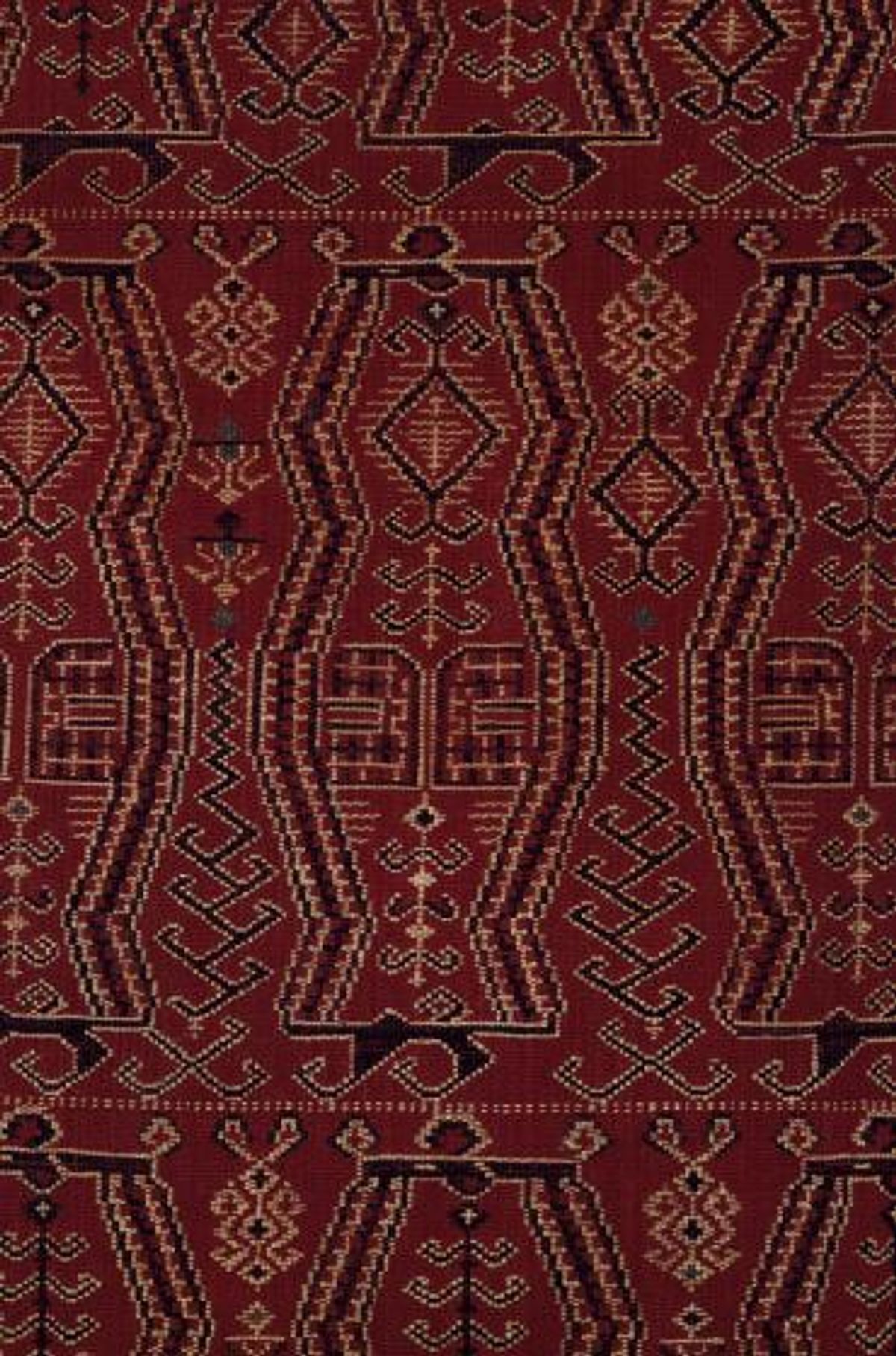 The pua kumbu is a sacred and ceremonial cotton warp ikat textile. It is woven by the women of the Dayak Iban tribe that populate the interior regions of Borneo, the largest island in Southeast Asia.

The blanket-sized cloth is made using the warp ikat method and woven on the back-strap loom. It is made up of two panels which are then stitched together with material commonly used at the time - home-grown and hand-processed cotton, and dyed with vegetable dye. The decorative process used is ikat - or tie dyeing. In this process, individual threads are dyed before being woven.

Before the cotton yarns are dyed, they have to undergo a complex procedure, called mordanting. Mordanting is a process where the natural oils on the outer layer of the wild cotton yarns are stripped away, using a chemical bath concocted out of different vegetation sourced from the jungle. This process allows the colours to adhere to the yarns and makes the yarns colourfast. Some of the ingredients include, wild ginger, oil from the nuts of the kepayang tree, palm salt, quicklime, rice gruel and metallic salts as alum to fix dye to the fibre.

The cloth is coloured using plants that grow in the tropical rainforest of Borneo. Red is the most important colour, and it is the dominant colour in this piece. There are several sources of red from the jungle. All require elaborate processes, chief of which is engkudu (morinda citrifolis) which requires the most complicated procedure. The shade derived from morinda is the shade that the Iban women most desire. The complication with producing this shade is in the mordanting stage. Mordanting is when the oils covering the fibres of the cotton are stripped to enable the dye to adhere. The mordanting process is also known as women's war among the Ibans. Another source of red is from the bark of the sebangki tree, a third, from the leaves of the engkerabai tree. The colour blue is extracted from two kinds of indigo plants. Blue comes from two sources of indigo, a bush and a creeper (tarum and renggat). Black is produced when segments of the yarns previously dyed red, are dyed once again, this time in indigo. Today synthetic dyes are commonly used.

There are many sources of inspiration and possible interpretations for the design of pua kumbu. One cannot guess, just by looking at the cloth, what it could mean. There are clues however. A significant one is what is called the praise name. This is the name given to the cloth soon after it is completed, when it is shown publicly to the longhouse community for the first time. Unfortunately in this case, we do not have the praise name. The praise name alone, however, does not reveal the whole meaning. The name might refer to a particular hero or demon. But the praise name does not provide answers to the question of relevance to the weaver's personal life and the dream she had that inspired this cloth. To know these answers, the only reliable way is to ask the weaver herself, or to ask someone who knows the cloth and weaver personally. In the absence of such information, we can only speculate.

One interpretation is that the cloth was woven for an initiation ritual. This interpretation is plausible considering the fact that pua kumbus are sacred cloths, and historically, (which includes the period that this cloth was woven) anthropomorphic figures were only woven by the most powerful weavers. There were many levels and ranks a weaver could attain in her life. A woman who had not attained the highest rank, through receiving appropriate permission dreams, would not have attempted powerful motifs, without exposing herself to risks. These risks are not specified, but they often refer to psychological damage, like falling into a state of stupor. This cloth falls under the category of the highest rank, a cloth that depicts gerasi, or demons/giants/non-human forms.

A key feature of the human figures (or engkaramba) on this cloth is the stripes around the waist. These distinctive stripes are a significant clue. They indicate a class of design called Gerasi Belang Pinggang. This figure, Belang Pinggang is a well known character in Iban stories. He is a demon/giant who took on human form and lived among humans for a few years.

The distinguishing physical characteristic of Belang Pinggang is a white stripe around his waist. (The name Belang Pinggang means Striped Waist). He married Gupi, and had a son, Geraman, aka Ensoh. He is descended from Lang Singalang Burong, the supreme god of the Ibans. This supreme god is also known as the bird god and god of war, and is represented by the brahminy kite. Belang Pinggang was one of the many lawgivers in Iban culture, in particular, he modified marriage laws.

Historically, the cloth was commonly made by women. (Today, there is at least one man in Sarawak who weaves pua kumbus professionally). The cloth was a forum to demonstrate women's intelligence, creativity, ingenuity and technical expertise, as well as spiritual favour. Weaving was one of the ways in which women living in remote longhouse communities could earn status. Women's status was regarded as equivalent to men's status. This parity of status was reinforced and demonstrated by the act of headhunting, which was historically the method for men to earn status. This method of war continued until the Malaysian-Indonesian confrontation in the 1960s.

Traditionally made of wild cotton, the cloth is now made with manufactured cotton and silk threads. The introduction of silk into the process was a breakthrough in innovation. This development was achieved through the cooperation of two parties, Edric Ong, a highly accomplished global cultural broker, and Karama Dampa, a master weaver from Rumah Garie longhouse in the Balleh River region.

The main technological obstacle the weavers faced when transferring to silk warp and weft was to find a way to apply the complex (and status giving) process of mordanting cotton onto the new material - silk. After many experiments, Karama, and the weavers of Rumah Garie, achieved this difficult feat.

Today, although cotton cloths continue to be made, silk pua kumbu, utilizing this specialized technical knowledge, are a distinctive feature of the pua kumbus originating from the remote Rumah Garie longhouse.